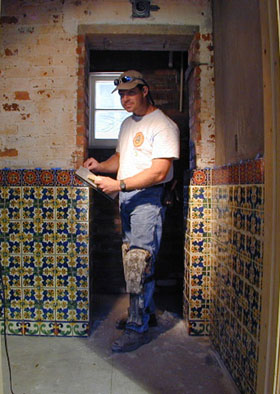 Jim Doane is a Florida native living in Central Florida since the early 70’s. His passion for masonry construction started in high school (Oviedo, class of ’86.) In Jimbo’s advanced drafting class, he became friends with Mike and Tony Pinard, whose father was a mason. They worked for his company after school and on the weekends.

Jimbo started as a laborer for them at their request when he wanted to help them after school. He instantly enjoyed working outside; watching the masons work their magic. For three years, his tools of the trade were a wheelbarrow and a shovel. Jimbo learned the skills of assisting, preplanning and organizing; and gained awareness of the many safety hazards of a jobsite to be avoided in order for the masons’ schedule to be productive.

At lunch and at the end of the day he would continue to learn the trade. During this period, most of Jimbo’s time was spent redoing his work after the masons pointed out his mistakes. As the years passed, Jimbo’s skills were honed and polished into becoming a master mason. During this time, his desire for the more creative, custom work developed.

Jimbo no longer enjoyed a long, straight wall or cared how many bricks his crew installed per hour. In May of 1993, he left All American Masonry and took the step of venturing out on his own to do custom masonry projects. Since then, he has developed into Central Florida’s custom masonry specialist. Jimbos’ skilled craftsmanship is reflected in his signature work, the restoration of Casa Feliz Historic Home Museum in Winter Park, Florida, completed in 2005.